What are No-Load Losses( Excitation Losses)? What is hysteresis loss in the transformer?

When the voltage is applied to the primary of the transformer, the alternating current flowing in the primary magnetizes the core. The core goes under the magnetization and demagnetization process because of the flow of current in the forward and reverses direction. With the reversal of the direction of the alternating current, the energy is lost in the form of heat in the core. The heat loss due to the repeated reversal of the magnetic field in the core is known as hysteresis loss. 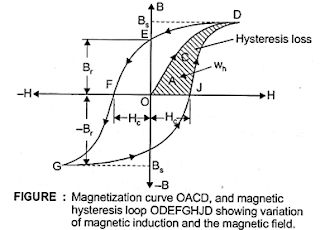 The hysteresis loss can be calculated by finding the area of the B-H curve. To minimize hysteresis loss, the core of the transformer is made of Cold Rolled Grain Oriented (CRGO) Silicon Steel because the magnetization curve area of this material is less compared to other magnetic materials. What is Eddy Current loss in the transformer? Because of eddy currents, the heat loss equal to  I2R  loss occurs in the core. Why is the iron core of a transformer Laminated? The current flowing in the sheet is equal to;

I= Potential difference of the EMF induced in laminated core/Resistance of the sheet.

As the thin sheet has higher resistance as compared to the resistance of the thick sheet, the current flowing through the thin sheet is very low in comparison to the current flowing through the thick sheet. With the reduction in the magnitude of the eddy current in thin stamping, the eddy current loss reduces drastically. That is why the core of the transformer is made of thin laminated sheets.

In addition to the dependency of eddy current on the stamping resistance, other electrical parameters like primary voltage and frequency also affect the eddy current loss.

The eddy current loss formula of the transformer is given below. Effect of Voltage and Frequency Variation on Transformer

Let us understand how the hysteresis and eddy current loss get affected by changes in frequency and voltage. We will take the four cases for the study of no-load losses of transformer.

In this situation, the eddy current and hysteresis loss will increase or decrease because of the following reasons.

4 thoughts on “No Load Losses in Transformer”