The property of the substance to resist the flow of electric current through it is known as resistance. The conductors have free electrons moving randomly inside the metal, and when the voltage is applied the electrons starts moving from the lower potential point to the higher potential point. 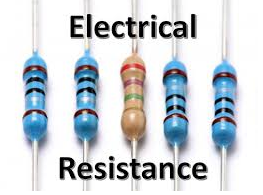 Hence, the resistance of the substance is defined as ratio of applied voltage to the current through the substance.

If one volt of potential difference is applied across the resistance cause 1 ampere current to flow through it, then the resistance  is equal to 1 unit. The unit of resistance is volt per ampere called ohm named after georg Ohm, The symbol of Ohm is Ω. The Ohm is the SI unit of the resistance.
R = V/I   ( Ohm’s Law)
R = 1 Volt/ 1 ampere

The relationship between different resistance units is as given below.

Effect of Temperature on Resistance

Similarly the resistance of the insulating material decrease with increase in temperature. The below given graph shown the relationship between the change in the resistance and temperature rise for three categories of the material widely used  for electrical application.


Resistance of the Different Materials

Substances can be divided into the following categories based on the resistance;

4 thoughts on “What is Electrical Resistance? Definition and Unit of Resistance”