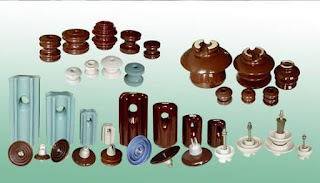 Most of the insulating materials are hygroscopic in nature and absorbs the atmospheric moisture present in the air. The absorbed moisture can dehydrates with rise in temperature of winding of electrical machines, and as a result insulator may become brittle. Furthermore, the resistance of the insulating material gets deteriorated with rise in temperature.

As the operational reliability of electrical equipment like motor, generators mainly depends on the insulation, the health of the insulation is required to be periodically checked and ascertained. Insulation Resistance (IR) and Polarization Index (PI) tests are two methods widely used for ensuring the healthiness of insulation system.

I = Current passing through insulating material

The measurement value of insulation resistance depends on the period of time for which voltage is applied because the current drawn by the insulating material decays with time. When the IR is taken initially and after one minute, the initial IR value will be different than the IR value taken after one minute.

The reason of this is that the insulator takes high current initially when the voltage is applied across it, and the current decays exponentially with time. The initial IR value will be less than the value of IR after one minute. Therefore, IR value should be taken after applying the voltage for one minute for accurate measurement of IR. The insulation resistance test does not give the correct reading and some advanced tests are carried out to ascertain the quality of insulating materials and remaining useful life of the insulation.

The  following advanced tests are performed to ensure the quality of insulation.

What is a Polarization Index or PI?

When voltage is applied across insulator the flow of current in the insulator can be broadly categorized into four categories. There are four components of current decides the polarization index of insulating materials.

This current is due to the flow of electrons between the conducting material and the insulating material. This is galvanic current through ground wall. Such a current can flow if the ground wall has absorbed moisture, which can happen on the older thermoplastic insulation systems.

The current may also flow if there are cracks, cuts or pinholes in the ground insulation and some contamination is present to allow current to flow. This current is constant with time. With modern insulation this current usually is zero (as long as there no damage to the insulation).

This is constant DC current that flows over the surface of the insulation. It is caused by conductive contamination (oil or moisture mixed with dust, dirt, insects, chemicals etc) on the surface of the winding. This current is also constant with time.

Electrical insulation is hygroscopic in nature and presence of moisture will be there either in low quantity or in excess. When an electric field is applied across the insulation, it starts absorbing electrons from the hydrogen molecules causing ionization of hydrogen. The molecules on the insulator containing water start aligning in the electric field.

The energy required to align the molecules comes from the current in the DC test voltage supply. This current is called polarization current. The water becomes completely polarized when the absorption of electron from hydrogen merging with oxygen is completed. Once the molecules get aligned, the current stops. The approximate time for complete polarization is 10 minutes. That is why the IR is measured after 10 minutes of applying voltage.

From above discussion, it is clear that insulator must be fully polarized and the leakage current and conduction current should reduce.

The polarization index is; A low value of PI indicates that the winding is contaminated with oil, dirt or winding have absorbed moisture. The polarization Index curve is as shown below. 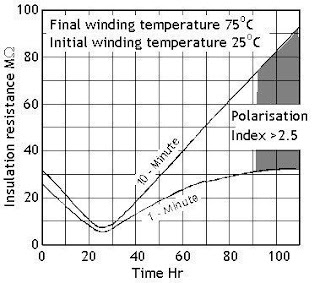 What should be the Minimum PI (Polarization Index) Value?
The Polarization Index acceptable values of the insulation is given in below table.This is the general guideline for interpreting the polarization index test results. The PI value should be more than 2.

DAR or DA test  is also the ratio test carried out to determine the quality of the insulation. The DAR test is conducted for lesser time than the PI test. The instantaneous insulation resistance test does not give the exact reading because the insulating material draw charging current initially and after some time it decays. The capacitive current must decay within 01 minute if insulation is healthy.

Dielectric Absorption Ratio (DA or DAR)  is the ratio of insulation resistance after 60 seconds and 30 seconds.

How to perform DAR Test?

Advantage of PI and DA Test